The shroud of the forest is heavy, and the land is dotted in marshes until the trees open up to an area on the James River. This is where America’s first permanent English colony once resided. And this is Historic Jamestown, where North America’s first interracial marriage happened.

Most everyone knows the story; Chief Powhatan’s daughter, Pocahontas, marries English tobacco farmer John Rolfe, which leads to many years of amity between the colonists and the Indians. I hear the archaeologists excavating in the background, and I can feel the spirit of the area pass through the breeze. The very beginnings of North America took place in this spot.

Beyond the early stages of North America, I think about the beginnings of interracial marriage. While the United States didn’t officially legalize interracial marriage until 1967, the union of John Rolfe and Pocahontas points to a very early prerequisite of acceptance regardless of background. Unfortunately for our future, however, their White and Native-Indian marriage didn’t directly progress into the latter formations of America. This was likely due to the famine, disease, and strife suffered in the remote location of the Jamestown Settlement. In turn, this cut off such an influence from migrating toward any sort of open-mindedness for future generations. 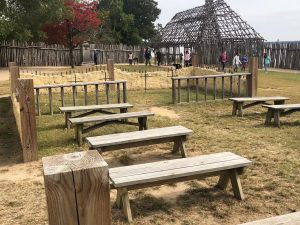 I see an area that appears to represent a chapel atop mostly dead grass. There are no walls here, and the wooden benches act as pews. I snap a photo. Here is the precise location of where John Rolfe married Chief Powhatan’s chosen daughter, Pocahontas, in April of 1614. Or as I like to refer to it, the spot of the first interracial marriage in North America.