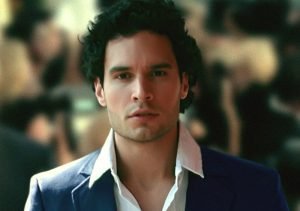 Have you always wanted to be in entertainment? How did acting come about for you?

I did, but I had a stutter problem as a kid, so I avoided it. When I was older there were a few school theater and film projects – a few actors didn’t show up, so I ended up jumping in and I became comfortable.

What and who inspired you to become an actor?

I don’t know if anyone really inspired me. I had a big imagination as a kid, I was always pretending I was some superhero, or I would imagine my situation was something completely different. Acting just kind of fit me.

We’ve noticed, aside from acting, you write. How does that differ for you and have you had any formal training?

I have a minor in journalism. I really had no choice, but to write my own vehicle, no one was going to give me a shot. So, writing became survival. I enjoy researching the story and stepping into the minds of the characters or rather developing them. It’s a therapeutic process.

Critics have compared your acting and character portrayal to both Javier Bardem and Marlon Brando. Can you elaborate for us?

I don’t like comparisons, obviously, with the actors you mentioned, I’m grateful if someone makes a contrast. I think part of it is the transformation of the characters I’ve played; purposefully trying not to look the same. I believe Brando and Bardem both have done some phenomenal transformational work, beyond just the makeup. Maybe that’s where those comparisons come into play.

The film studios, Ave Fenix Pictures, you co-founded with Mexican actress Mónica Esmeralda León is the first Latino film studio in Chicago and the Midwest. Tell us a bit about that.

That’s not what we set out to do, we found out we were when people told us (laugh). I’m super happy for Monica, she’s an amazing producer who cares about everyone on set, doesn’t complain, and works so hard to get the job done. She has an amazing story coming to this country and achieving what she has at such a young age. To me Ave Fenix Pictures will always be our community and neighborhood we came out of, I’m so happy for everyone involved and graphed into the story.

Do you have a particular genre of film you prefer? If so can you explain?

I like drama the most, but I think I would be really good at comedy because I kind of started in comedy. No one would assume that because I talk more seriously and the way I may conduct myself, but I’m a goofball (laughs). I’d like to try comedy or rather get back into it.

Are there any actors or directors, you would love to work with in the future? Any actors you’d like to play alongside?

I really like the epic type of film. If Mel Gibson ever did another one, I think at one time he was rumored to do an Alexander the Great or a Judas Maccabeus film – I would love the opportunity and of course, work hard for it. Another thing too is that I have the heritage to play a lot of these roles. It’s cool if you can actually cast the real people, not to say you always need to do that, obviously, we’re actors, but it’s good to see the real thing sometimes.

Tell us what has been the best and worst part of 2020 for you?

That’s tough, it’s been a hard 2020 on everyone. Honestly, I try to turn my worst day and my toughest moments into my strengths. I use the adversity. I know that really doesn’t answer your question, but that’s how I move forward.

Aside from writing-acting is there anything else you enjoy doing?

Reading, I research, I cook, I watch a lot of shows on history. I’m kind of nerd as some would put it (laughs). I really do enjoy cooking, it’s another art form, going to the grocery store is a big occasion (laughs). Another hobby for me is theology, I enjoy studying apologetics.

What is up next for you? Are you working on anything new?

‘Where Sweet Dreams Die’ is my next film, things are constantly changing with the pandemic, but it’s the next project. The film is exploring a lot of what is happening today. It’s crazy, because I wrote it before this all happened and it’s so relevant to the times, we’re living in.

A Quick Chat With Bobby Flay