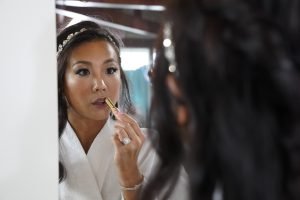 Jackie Chiao, a DMV native, will be featured on TLC’s smash-hit show “Say Yes to the Dress America”, premiering on Saturday, February, 8th at 8 pm ET/PT. Even though her experience has been an absolute whirlwind, Jackie made time to speak to us about what it’s been like throughout all the dress-selecting-escapades.

How did you and your fiancé meet?

A friend forced me to go to a brunch at Boqueria with a lot of people and this friend said it would be really fun. It ended up not being a lot of people at all – five people. Dan (my fiancé) was one of them. I didn’t have anyone else to talk to and Dan had a lot of charisma, so we hit it off right away. So, even though I was somewhat forced into the situation it ended up working out really well!

Was it hard to convince your fiancé to take part in the show?

No, not at all! He knew about everything before I did, so the whole time he realized this could be really fun for me as I would get to pick out a dress with the focal point on me. But then when we finally went to New York he realized that this whole was happening to him too! But Dan was completely on board from the get-go.

When is your wedding day?

It will be on April 21st. It’s coming up around the corner and it’ll be in Mexico.

What do you expect in a dress and do you consider yourself to have expensive taste?

Yes and no. I don’t go for designer items just because they’re designer items, but usually, the higher-end name brands have better quality. But I do tend to pick items that are on the more expensive side. However, I’m not aiming for that, it just happens to work out for me this way. And as for a wedding dress, I didn’t really know what I was going to do. I knew I didn’t want a ball gown because I’m not very tall and I didn’t want to look like a cupcake! The dress I ended up picking truly was a surprise to me.

Can you briefly share with me one of your biggest issues on the show?

The hardest part was picking the dress because there were so many gorgeous options. They were so nice to let me try on so many, but they weren’t clicking with me, therefore my appointment at Klienfeld’s went over the time I had scheduled.

In what ways do you think you represent DC and the surrounding areas on “Say Yes to the Dress America”? 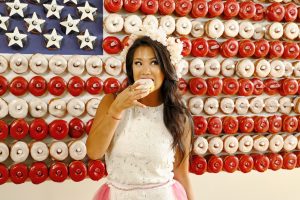 I was born and raised in the DMV area and I never really ventured far so I’m the essence of a native and proud Washingtonian. I used to dance for the Washington Wizards, and I’ve been very involved in DC events and other groups. It’s really a cool city that everyone in the world should visit at some point due to the history behind it.

Do you have a favorite restaurant in DC?

Boqueria of course. Wonderful. My go-to nowadays is Hill Country Barbecue Market because of the vibe of the place. They also have amazing food (even though I don’t eat red meat), and they have giant mason jars which are really fun.

What is your guilty pleasure?

Chips (laughs). Chips are definitely my guilty pleasure. For my birthday one year, Dan got me a Costco sized bag of chips and it was one of the best presents I’ve ever received. I’m talking family-sized bags of chips. I could eat chips all day. It’s embarrassing.

After the show airs on February 8th, do you have any idea of what social platforms you might want to stand for?

If I had enough influence after the show, I would certainly stand for something. But right now, it has been pretty surreal. It’s such a monumental show for TLC. I haven’t had time to process that yet because it’s all been such a whirlwind.

Do we men have a chance for a tuxedo show spin-off, whereas our fiancés veto our tuxedo choices?

That’s an amazing question but I’m so sorry, no chance (laughs). I know nothing about tuxedos and I’m sure there are different cuts, styles and cufflinks, and all those fun things, but to the everyday viewer, they’re not going to know the difference (laughs). With a wedding dress, the audience can immediately tell that one dress is a ball gown, or a black dress, or a sparkling dress. As much as I feel like you guys deserve a show like that, I don’t think it’s ever going to happen. I’m so sorry!

Catch up on “Say Yes to the Dress America” episodes here: https://www.tlc.com/tv-shows/say-yes-to-the-dress-america

Left DC: Solé Miami- A Boutique Hotel On The Ocean

A Conversation With Angela Robinson From OWN’s #1 Rated Series, “THE HAVES AND THE HAVE NOTS”