Michael Ealy attends a press conference at Howard University to promote “Think Like a Man” that debuts this weekend on April 20th. 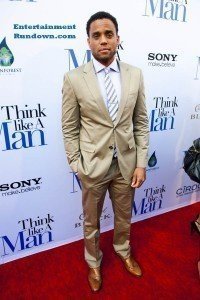 The movie “Think Like a Man” made it’s highly-anticipated debut in theaters this past Friday, April 20th, and I had the privilege of meeting and interviewing Michael Ealy, who starred as “Dominic” in the movie.

Dominic represented the community of eligible bachelors in the world who are not as financially-established and the obstacles they face with making a love connection.

My question to Michael Ealy was about whether he could personally relate to the character that he played.  I asked him if he found himself having to make an extra effort to step outside of who he really was to identify with the role.

“As an actor, you always try to find something inside of you that identifies with your character.  In this particular film, “I was Dominic”.  When I was in my 20’s, I was not established at all.  I didn’t know how to be a man.  There were a lot of things in hindsight I was doing wrong, but I was 20, so I couldn’t get it right.  Dominic represents the younger version of me and there was a time when I was a lot like Zeke (played by Romany Malco), and there was part of me that could be a lot like Jeremy (played by Jerry Ferrara).  I could personally relate to many of the roles at various times in my life, that in retrospect helped shape the man I am today.”

Mr. Ealy also noted that he learned many things from his fellow cast.  One of his examples was co-star, Meagan Good who played the role of “Mya” in the movie.  He said he empathized with the confusion she experienced with trying to discover oneself and how that can affect your love life.  A person who is in pursuit of learning themselves may not always know how to act, as well as a person who has been emotionally damaged in some way.

“Think Like a Man” has stirred up much controversy in the eyes of men and women who are passionate about the “Mars versus Venus” conversation.  The best thing this movie has to offer would be the dialogue that it could potentially open up about love, sex, and relationships.

I believe that going to see this movie would definitely be a win/win situation for anyone who finds interest in matters of the heart, mixed with romantic comedy.

After the Women’s March: The Good, the Bad, and the REAL