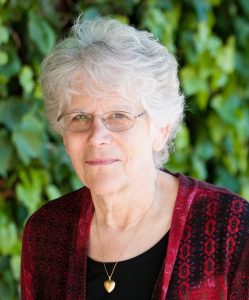 Joyce Schmid’s poetic ruminations echo in a forward-thinking sort of way, so much so that her writing can be compared to a favorite pair of jeans – classic, trend-defying, the perfect fit. Schmid’s talent as a poet rests in her ability to say the touching things many of us do not know how to express. Likewise, her eye is equally sympathetic to the world we preserve. The following poem, “Fiftieth Anniversary”, leaves us with a nostalgic smile, as solace is found in the reflections of yesteryear and a future yet to come by way of a poem that celebrates the wonders of marriage.

In speaking about the poem, Joyce shares:

“In July 2019, my husband and I met our son and his family for a vacation in D.C. We arrived during the celebration of Apollo 11’s moon landing half a century before. The event sensitized me to how much time had passed, both since the moon landing, and since the two of us had first explored D.C. as young lovers. The excitement of the celebration,  the children’s enthusiasm and wonder, and the happy memories collided with grief for passing time, all of which I tried to express in this poem.”

Summer is more difficult than I remember

in between the white-domed building and the obelisk,

people standing in the heat to sell ice-water for a dollar,

tents along the Mall to celebrate our landing on the moon.

The world was cooler half a century ago when rockets,

now exhibits in the Space museum, fired up and flew,

talked to Houston, kicking moon-dust with their toes.

Now anyone can touch the moon, worn smooth,

and oddly black. No one had consent to break

this fragment off and put it on display.

We can’t return the moon’s virginity.

Fifty years ago, you brought me here.

We were as undiscovered as the moon.

Today we’re hot and breathless in a different way.

We sit down on the lawn and watch the grand-kids

try to play a blade of grass. They laugh

to hear it imitate the love-call of a moose.

They don’t complain of heat.

Joyce Schmid is a grandmother and psychotherapist living in Palo Alto, California, with her husband of over half a century. Her poems have appeared in Literary Imagination, New Ohio Review, Antioch Review, Poetry Daily, Missouri Review, and other journals and anthologies.

Your Guide to the 2017 Awards Season

Poet’s Viewpoint: In Which She Considers The Water