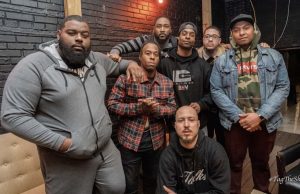 Coalition DJs together with DC artists A-1 Flow and Suave for Private Listening Session.

I have heard some newcomers in hip-hop making some noises that sound vaguely familiar. It’s like hearing a ghost….tapping on a window. (I’ve experienced that too…but that’s a completely different story.) I hear remnants of Hip-hop culture in some of the new stuff these kids are making, and I have to ask, “why did it all go away in the first place?” I can’t prove exactly what caused the music industry to bleed itself of content and strip the essence of being an Emcee from the rap game. However, I think it has something to do with the “Major Labels” insatiable need to commercialize and own any & all IP. Fortunately, I hear things are finally changing.

”I remember seeing famous bands and musicians being paraded into press conferences and courtrooms to convince their fans how much sharing their music files was damaging their lives. I remember seeing fans so confused, and hurt by what these wealthy musicians were accusing them of. Many Metallica t-shirts were burned.”

The Coalition DJs are responsible for breaking some well-known artists such as T.I., Wocka Flocka, Future, Migos, Derez Deshon, Yella’ 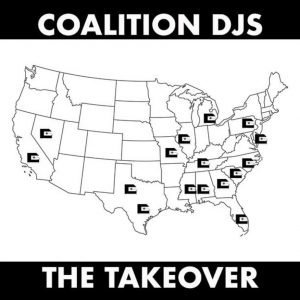 Beazy and many, many more. They have built such an efficient platform that the industry has repeatedly gone back to them to get what’s coming up next. Now they are sharing their blueprint and spreading the Coalition DJs to more cities than just Atlanta. They now have activated Coalition DJ crews in Detroit, Philadelphia, Miami, Alabama, Los Angeles, Houston, Dallas, Las Vegas, Mississippi, Tennessee, North Carolina, South Carolina, St. Louis, and THE DMV.

The great news is that the DMV is the next stop for the Coalition DJs. I believe they can re-introduce more talent into the Urban Club Music Charts.  The Atlanta-based DJ crew has entrusted the DMV Chapter of the Coalition to  Byron “Sleep” Stevenson. Sleep originally made himself an initiate of the DJs “Chapter Expansion” process in 2015, and through careful work and relationship building became official. The path to making quality hits has never been as direct in the DMV as it is right now. The DJ crew here in DC, MD, and VA is growing fast and already has a star-studded line-up featuring: DJ Jo’Iyce, DJ Blustar, DJ Saysay, DJ Ratchet, DJ Bigg Sipp, DJ Trill, and DJ Ginger Briks. In addition to the old originals, the newcomers are helping to expand the brand with talent like: DJ Sheesh, DJ Norequests, DJ Holliwood, DJ Main Event, DJ Oneway, DJ QHill, DJ Infinity, DJ Adam West, DJ OnewayRicky, DJ Pinoblack, DJ Windy City, DJ Rok, DJ Hollywood Reds, DJ KidQuest.

“I was able to bring the Coalition DJs to the DMV through years of building relationships in Atlanta, and then I was blessed to be able to give DJ Jo’iyce a leadership role. Now artists have access to a national syndicate of club DJs through the Coalition DJs DMV. Together we are going to break many more records.”

One Year With Coalition DJs DMV

Catch the coalition DJs every Wednesday at their New Music Wednesdays event to get your music reviewed by the DJs that have their finger on the pulse of the industry as they work to revive hip-hop.